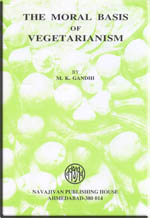 THE MORAL BASIS OF VEGETARIANISM

Fresh fruit according to one’s taste and purse. In any case it is good to take sour limes a day. The juice should be squeezed and taken with vegetables or in water, cold and hot.
All these weight are of raw stuff. I have not put down the amount of salt. It should be added afterwards according to taste.
Now, how often should one eat? Many people take two meals a day. The general rule is to take three meals: breakfast early in the morning and before going out to work, dinner at midday and supper in the evening or later. There is no necessity to have more than three meals. In the cities some people keep on nibbling from time to time to time. This habit is harmful. The digestive apparatus requires rest.