This is the first pictorial biography of Gandhi in which the narrative-concise, readable and incisive is illustrated with contemporary photographs and facsimiles of letters, newspaper reports and cartoons, adding up to a fascinating flash-back on the life of Mahatma Gandhi and the struggle for Indian freedom led by him. There is a skilful matching in this book of text and illustrations, of description and analysis and of concrete detail and large perspective. This pictorial biography will revive many memories in those who have lived through the Gandhian era; it should also be of interest to the post-independence generation.

Shri B. R. Nanda - former Director, Nehru Memorial Museum and Library, New Delhi. His full-scale biography of Mahatma Gandhi has been published in India, Britain and the U.S.A. and translated into French, Spanish, Italian and several other languages 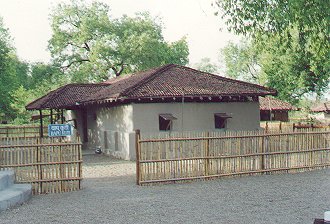 Sevagram ashram near Wardha in Maharashtra founded by Gandhiji in 1936.

In January 1948, before three pistol shots put an end to his life, Gandhi had been on the political stage for more than fifty years. He had inspired two generations of India, patriots, shaken an empire and sparked off a revolution which was to change the face of Africa and Asia. To millions of his own people, he was the Mahatma- the great soul- whose sacred glimpse was a reward in itself. By the end of 1947 he had lived down much of the suspicion, ridicule and opposition which he had to face, when he first raised the banner of revolt against racial exclusiveness and imperial domination. His ideas, once dismissed as quaint and utopian ,had begun to strike answering chords in some of the finest minds in the world. "Generations to come, it may be", Einstein had said of Gandhi in July 1944, "will scarcely believe that such  one as this ever in flesh and blood walked upon earth."
Though his life had been continual unfolding of an endless drama, Gandhi himself seemed the least dramatic of men. It would be difficult to imagine a man with fewer trappings of political eminence or with less of the popular image of a heroic figure. With his loin cloth, steel-rimmed glasses, rough sandals, a toothless smile and a voice which rarely rose above a whisper, he had a disarming humility. He used a stone instead of soap for his bath, wrote his letters on little bits of paper with little stumps of pencils which he could hardly hold between his fingers, shaved with a crude country razor and ate with a wooden spoon from a prisoner's bowl. He was, if one were to use the famous words of the Buddha, a man who had "by rousing himself, by earnestness, by restraint and control, made for himself an island which no flood could overwhelm."
Gandhi's, deepest strivings were spiritual, but he did not-as had been the custom in his country- retire to a cave in the Himalayas to seek his salvation. He carried his cave within him. He did not know, he said, any religion apart from human activity; the spiritual law did not work in a vacuum, but expressed itself through the ordinary activities of life. This aspiration to relate the spirit- not the forms-of religion to the problems of everyday life runs like a thread through Gandhi's career; his uneventful childhood, the slow unfolding and the near- failure of his youth, reluctant plunge into the politics of Natal, the long, unequal struggle in South Africa, and the vicissitudes of the Indian struggle for freedom, which under his leadership was to culminate in a triumph not untinged with tragedy.